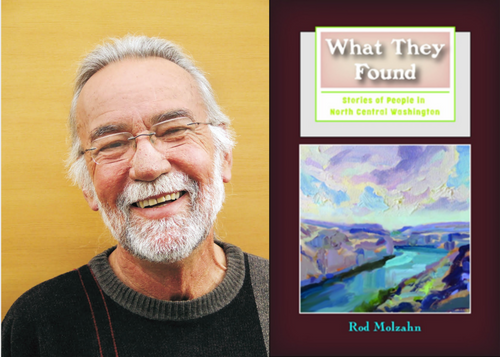 Join us in the Red Barn for an author presentation with Wenatchee Valley local, Rod Molzahn, on his book "What They Found: Stories of People in North Central Washington." People have lived in North Central Washington for at least 8,000 years and the land has provided for them. They have lived on the land and from the land. The land satisfied all the needs of the early people: food, clothing, shelter, tools and weapons. The people were part of the land and the land was part of the people. They believed the Creator had given the land to them to sustain them. The land was precious. The land and the people cannot be separated.

Doors open at 6:30pm for community social with local beer and wine available for purchase. The presentation begins at 7:00pm.
Free event with a donation basket at door.

Since these events are now indoors in close quarters, only people who are vaccinated for COVID-19 (regardless of eligibility) may attend. We still ask that you wear a mask. Thank you for following this honor system.
Windows will be open during the event (along with an air purifier operating), so please bring a layer to keep you warm.

A Book for All Seasons will be at the event to sell Rod's book.

Rod Molzahn has lived in North Central Washington for more than fifty years and has been writing about the area for twenty of those years. He has been heard on Wenatchee Valley radio stations telling stories about the people of North Central Washington and has produced spoken word CDs of short stories about the people and events of the area’s past. He has contributed over 150 monthly articles on regional history for Wenatchee’s Good Life magazine since 2007. Molzahn has also been an occasional contributor to Wenatchee Valley Museum and Cultural Center’s Confluence magazine and is a speaker in demand for a variety of groups and historical societies across North Central Washington.